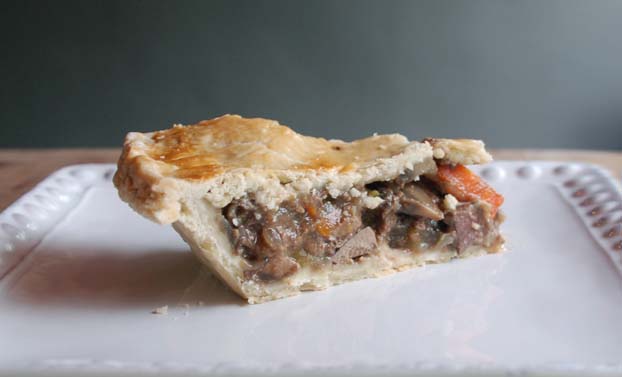 This is going pretty out there even for me…someone who enjoys trying just about anything when it comes to food. Here I was, with a bag of various organ meats acquired by accident, from an organic and pasture-raised meat supplier. I wasn’t about to let them go to waste.

I’m all for nose-to-tail eating, and I’m fond of some offal. Liver makes a somewhat regular appearance on our table, particularly lamb liver, which is what I asked for. Lamb liver is mild and tender. It’s much more pleasant than beef liver, and less sinewy than chicken liver. But instead of delivering a pound of lamb liver, I was given two pounds of frozen mixed lamb organs (which I didn’t check until I got home). There was a tongue, 2 kidneys, a very large liver and a heart. Not knowing what I could possibly do with it all, I left it in my freezer for several months while I worked up the nerve.

I’ve tried heart in a fancy restaurant before (heart Carpaccio), but kidneys and tongue are scary—especially the kidneys. I’m well aware of their reputation for a urine-like smell and taste, and I was hesitant to go there. The tongue I could deal with, once I fought off the taste buds with my knife.  Having just watched an episode of Bizarre Foods with Andrew Zimmern, I decided to go all in–heart, kidney, tongue, liver and even the thick blood pooled in the bottom of the bag. It’s gross, I know, but cheer me on. I’m being brave.

I decided to make an offal (hopefully not awful) meat pie for dinner, based on a steak and kidney pie, but this pie would be steak-free. I had everything I needed to make it easily: carrots, an organic frozen pie crust, beef stock, mushrooms and onions.  Hopefully all of the flavors would mask anything off-putting. I crossed my fingers and went with it.

So how did it go? The pie came out quite pretty, reminding me of story books—with a little bit of Sweeney Todd thrown in. I chopped everything in small pieces and mixed them up, so you really couldn’t tell one meat bit from the other. Well, not true. I could tell one meat bit from the other. The heart was pleasant-tasting with a chewy texture. The tongue was more delicate in texture, with a mild taste. The liver was familiar, with its paté-like texture. The kidneys are what got me.

I made the mistake of trying just a little bit of pan-sauteed kidney before I mixed them in. They were pungent, intensely lamb-flavored, with an unmistakably musty urine taste (and smell). The texture was like a cooked mushroom—mushy. My husband didn’t mind them a bit in the pie, but once I picked up on the flavor, I could distinguish even the tiniest bit of chopped-up kidney. I’m not a fan. That said, I did enjoy eating the pie for dinner, despite my distinct awareness of the kidney. I would try them again, too. Perhaps in more experienced hands.

Since this was just an experiment, I will not be including the offal pie recipe in this post. Unless I get a bunch of requests, which I highly doubt will happen!