Grayson, now almost 11 months old, went to his first birthday party last week. It was a Halloween 1st birthday party and all of the moms and babies dressed up. Can I tell you how cute this party was? I’ll show you. 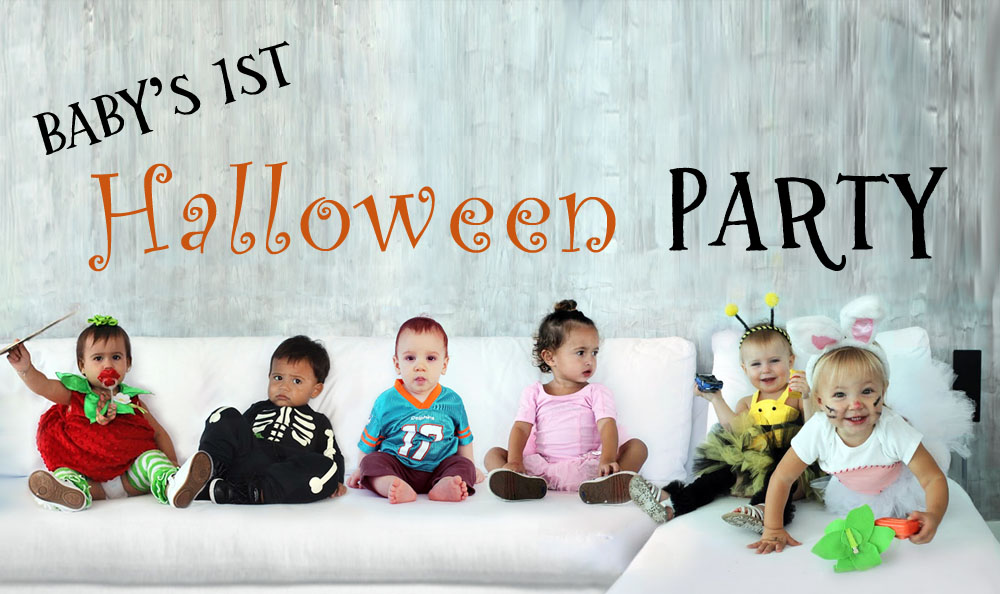 The entire photo is below. Unfortunately small due to the size limits of my blog page.

A total of eleven babies and toddlers showed up. We had a mouse, two little skeletons, Supergirl, a doctor, a strawberry, a Marlin’s fan, a ballerina, a bee and a bunny. Grayson was a baby octopus and I was a chef. He was originally going to be an owl, but the costume I purchased on Zulily was too big. I ended up finding his octopus costume online and it fit perfectly. The little tentacles didn’t bother him a bit and he looked so cute even without the hat! To match him, I threw on an apron I already owned and inexpensive chef hat. I always wondered why people bothered with a 1st birthday party if the baby won’t even remember it. Getting through the first year is a big deal, so the party is just as much for the moms (and dads) as the babies.  I am already planning my son’s 1st birthday at the end of November.

How we took a group baby photo

Trying to take a group photo of little ones at the party was impossible. No one would sit still. We wanted to place them all on the couch together, so did the next best thing. Throughout the day, we took pictures of each one of them on the couch individually, and then I mashed together the photos in Photoshop. It took a few hours, but the result was priceless. You could do this for your next party with the right set-up and some skill.This type of photo could be recreated with a simple backdrop and good, natural light. I’m considering doing something similar for Grayson’s 1st birthday using one of the premade backdrop/floor scenes from Swankyprints on Etsy.

This worked so well for a few reasons:

This living room is on the high floor of a condo with big windows. The filtered sun kept shadows at a minimum and light consistent.

I ended up having to stretch this couch a lot to fit all of the babies, then rebuild it from a photo of a different couch. Luckily, the back of the couch was fairly consistent in the photos so I didn’t need to do much work there. If this had been a tufted or patterned couch it would have been much harder to do.

This painted wall is very forgiving. It has lots of texture and was easy to mash-up for the photo. My biggest issue was getting the colors consistent as the camera tended to over correct for color. If you look closely at the photo there are some strange cyan and magenta colors in there instead of an unsaturated gray. I could have fixed this with more time, but didn’t have it

For the most part, the camera angles were straight on, making it easier to mash the photos together.

You don’t have to be the best, but you need to be comfortable with this program. I’ve been using Photoshop for a very long time and am self-taught.