I can’t remember the last time I made a cupcakes or muffins (though I make a few cakes every month), which is why I asked my sister and her husband to submit their recipe for gluten-free pumpkin cake muffins. I have been watching my sister, Amy from afar and am very proud of her. Amy was once a struggling waitress trying to work her way through college while battling weight issues. Now she’s a Nike model and Elite Beachbody fitness coach. As I write this, she is one of the top 20 coaches in the country, making a very good living by inspiring others. Go Amy! To read more about Amy, visit her blog.

So what does Amy eat when she wants something sweet? I was able to pull this yummy recipe from their hands. It’s a delicious gluten free muffin packed with fall flavors like pumpkin, cinnamon and maple syrup. Made with almond flour and almond butter, these are high in protein. We call them cake muffins because of their light texture and the delicious icing on top, making them a cross between a muffin and a cupcake. Whatever you call them, these are yummy enough — and healthy enough — to eat for breakfast or dessert! 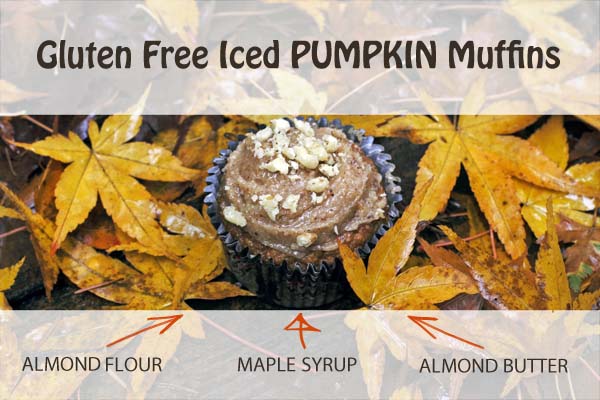 When I think of cauliflower dishes, I think of curries. Spicy curried cauliflower with tomatoes and coriander is one of my favorites.  I actually prefer cauliflower to its more cabbage-y cousin, broccoli. It’s delicious and nutty when roasted, and I often use it in soups. I’m eager to try it in shaved in a salad (any recipes out there?). Cauliflower has a presence lacking in many veggies. There’s just something about it that makes me pause and consider before diving in.

This roasted cauliflower and almond soup is creamy and comforting, punctuated by the warm, earthy taste of cumin and floral coriander. The roasted cauliflower pairs beautifully with almonds, and the soup has a velvety, rich texture. You can easily make it vegan by substituting almond milk for the cream.

Epicurious magazine rated cauliflower the front runner vegetable for 2013. Yep. The lowly cauliflower is trendy, and you better start eating it before it becomes passe’.  Its’ boring white façade can now be found at your local farmers market in bright purple and orange. No longer smothered in orange cheese, this nubby vegetable is making its way onto some sophisticated plates. Browsing the blogger sphere, I see it fried, pickled, frittered and jerked. It’s a popular substitute for cream, rice, eggs and even mashed potatoes. Endlessly versatile and delicious, cauliflower deserves its place in the spotlight. Now does anyone know where I go to nominate okra for 2014’s vegetable of the year?

If you don’t have heavy cream, a good substitute is sour cream or plain yogurt. Just thin the sour cream or yogurt out with milk and mix into the soup after you have removed the pan from the heat.
To make this recipe vegan, skip the heavy cream altogether and thin the soup with a little bit of unsweetened almond milk at the end.

Drizzle sliced cauliflower with 1 tablespoon of oil and arrange on a large cookie sheet. Roast in the oven for 10-20 minutes, until the cauliflower is nicely browned.

Blanch the almonds in boiling water for a few minutes and drain. Rinse under cold water and pop off the skins,

Using a food processor, grind the almonds until they reach the texture of sand.

Saute onion, cumin and coriander in the remaining oil in a large stockpot. When the onion is soft, add garlic and cook for 1 minute.

Add the roasted cauliflower, almonds and stock to the pot and simmer over medium-low heat for 20 minutes, uncovered.

Turn off the heat and use an immersion blender to puree the cauliflower mixture. Add heavy cream and stir. Taste and season with salt and pepper. Garnish with slivered almonds.