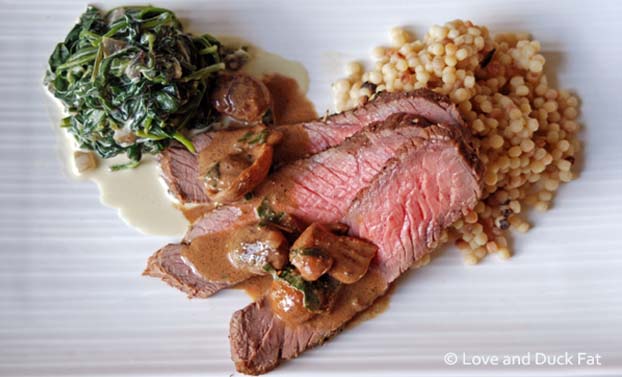 Why not make a London Broil this Valentine’s Day?

Maybe London Broil isn’t the first thing you think of when you think of romantic Valentine’s Day meals, but it should be. I’ll give you three good reasons why.

Reason one: Your usual Valentine’s Day fare may be a filet mignon or lobster tail, but why serve up a cliché? This recipe for London Broil with wild mushrooms is every bit as romantic (and delicious). Its home cooking for the one you love, and what could be more romantic than that?

Reason two: A London Broil steak is easy to make and affordable. It’s usually a flank or top round steak, marinated for flavor and tenderness. You can cook up a meal for two and still have leftovers for juicy roast beef sandwiches the next day. Get the most bang for your buck from your hard work in the kitchen.

Reason Three: London Broil is sexy, especially when you top it with a creamy wild mushroom sauce. Score big points when you slice into a perfectly-cooked steak to reveal a delightfully pink center.

Some tips for making the perfect London Broil:

Add the marinade ingredients to large resealable plastic bag. Add the steak and seal shut. Place into a large baking dish to prevent spills. Marinate in the refrigerator 4 hours to overnight, turning the bag a few times.

Preheat the oven to a high broil. Remove the steak from the marinade and reserve the marinade for the sauce. Pat the steak dry and season liberally with freshly ground black pepper and kosher salt. Place into an oven-safe broiler (shallow) pan and cook about 8 inches from the heat. Cook for 6-7 minutes per side until an internal temperature reaches 130 degrees F.

Remove the steak from the oven and transfer to a plate. Allow to rest for 10 minutes before carving.

Add butter to a large skillet heat on medium-heat until foaming. Add the mushrooms to the pan. Cook until the liquid is released and the mushrooms are well-browned. Remove the mushrooms from the pan and set aside.

Add the marinade, wine (or liquor) and broth to the hot pan. Cook on high heat until reduced, about 3-5 minutes. Lower the heat, add the cream and mushrooms and cook for 5 more minutes. Season to taste with salt and pepper before serving.

To serve, cut the steak across the grain in thin slices. Pour any steak juices into the sauce and spoon over the steak.