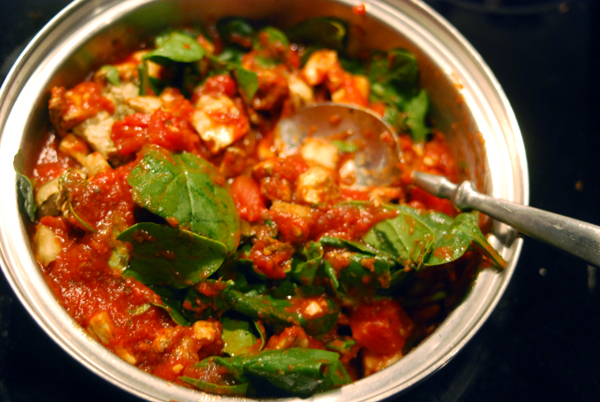 I’ve been making an effort to cook eggplant more often. It’s one of those vegetables too often relegated to a single dish: Eggplant Parmesan.

Lately, in an effort to make eggplant my friend, I buy one every time I hit the market. The organic ones on my grocery shelf come wrapped in plastic.  It helps them keep longer, and relieves me of the pressure to eat them quickly like tomatoes or spinach. This makes them friendlier, but I’m still wary of that “bitterness” people describe. Each time, I diligently salt and sweat my eggplant to remove this bitterness, but someday I just may try preparing it without.

Don’t let this extra step deter you from cooking eggplant more often. It is really easy to prepare and has a delicious texture when cooked – similar to mushrooms.

I used a jar of organic pasta sauce in this recipe to make it super easy and added fresh baby spinach to pump up the nutrition and flavor. You can also make your own sauce using canned or fresh tomatoes, just adjust the seasoning to taste.

First, cut your eggplant into large slices the long way, about 1 inch thick. Lay them on paper towels and sprinkle generously with salt on both sides. Allow to “sweat” for 20 minutes.

Rinse the salt from the eggplant and cut into chunks. In a bowl, toss the eggplant salt, pepper and a generous swig of olive oil. Arrange eggplant in a single layer on a baking sheet and cook in the oven for about 20 minutes.

While the eggplant is cooking, sauté onion in olive oil until soft. Add garlic and chili flakes. Add tomato sauce and season to taste.

While your sauce is simmering, bring your pasta water to a boil. Season the water with salt and cook pasta until al dente. Drain pasta and toss it while it’s still hot with the tomato sauce. Now toss in your baked eggplant, spinach and basil. Serve topped with crumbles of Parmesan cheese.